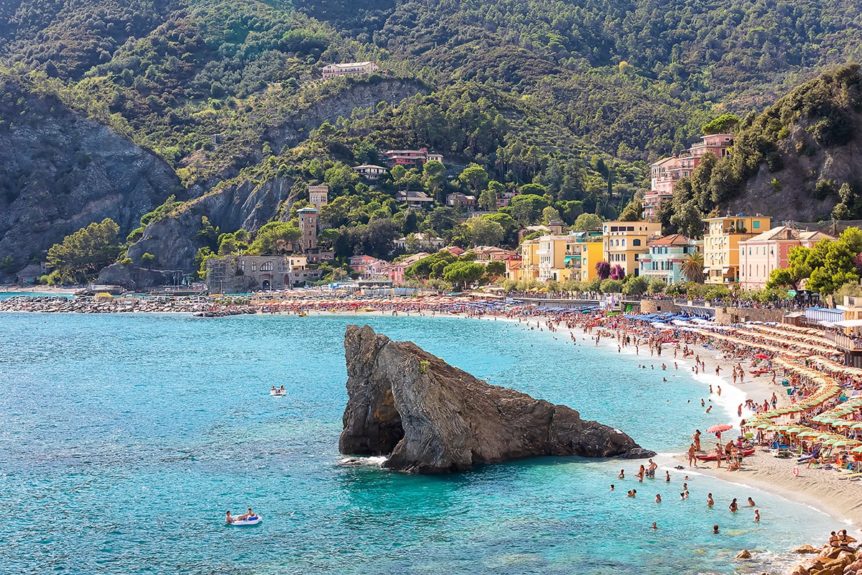 Monterosso is the last village of the Cinque Terre, but it is the largest and most populated one. The town is divided in two by a promontory that is crossed by passing through a tunnel about a hundred meters long: on one side the area of ​​Fegina, with the station, the summer residences and the numerous bathing establishments; on the other, the old port with its historic center characterized by the typical Ligurian alleys full of bars, restaurants and clubs. Monterosso is the only town in the Cinque Terre that has a large beach with bathing establishments equipped with every comfort; thus it lends itself to demanding family tourism that is attentive to quality. However, lovers of the wildest sea can find a place on the rocks under the Aurora tower.

Like the other villages of the Cinque Terre, Monterosso also preserves significant historical traces such as the parish church of San Giovanni Battista, dating back to 1282 and the sanctuary of Nostra Signora di Soviore, whose origins go back to the Romanesque period and which stands out on the hills above the town at an altitude of 418 meters. Another attraction, this time dating back to modern times, is the Statue of Neptune or the Giant. The statue, an imposing reinforced concrete structure that overlooks the entire bay, rests on a spur of rock and overlooks the beach of the same name. Built in 1910 by architect Francesco Levacher and sculptor Arrigo Minerbi, it is 14 meters high and 170 tons heavy. But, undoubtedly, the most intense cultural experience that can be had in Monterosso is that of rediscovering, or approaching for the first time, the poetry of Eugenio Montale.

The Nobel Prize of Literature spent his summers in Monterosso in the villa of Fegina (now a private residence), and his presence gave rise to the paths of the Literary Park named after him. In his works we find all the sublime beauty and suggestion that these places give to the traveler. From “Meriggiare pale and absorbed” to “The house of the customs officers”, from “La Punta del Mesco” to “I limoni”, the verses of Montale tell the light, the colors, the flavors, the atmosphere of Monterosso and the Cinque Terre . Monterosso, in addition to sea and culture, offers tourists who love trekking many suggestive routes, such as the path to Vernazza and the one to Levanto passing through Punta Mesco. There is also no shortage of gastronomic excellence: the wine grown in the terraces overlooking the sea and the famous anchovies of Monterosso, fished with the traditional lampara, and processed in salt.

The Monterosso anchovies are a Slow Food presidium and can be tasted in the numerous restaurants of the village, as well as being bought in the shops.