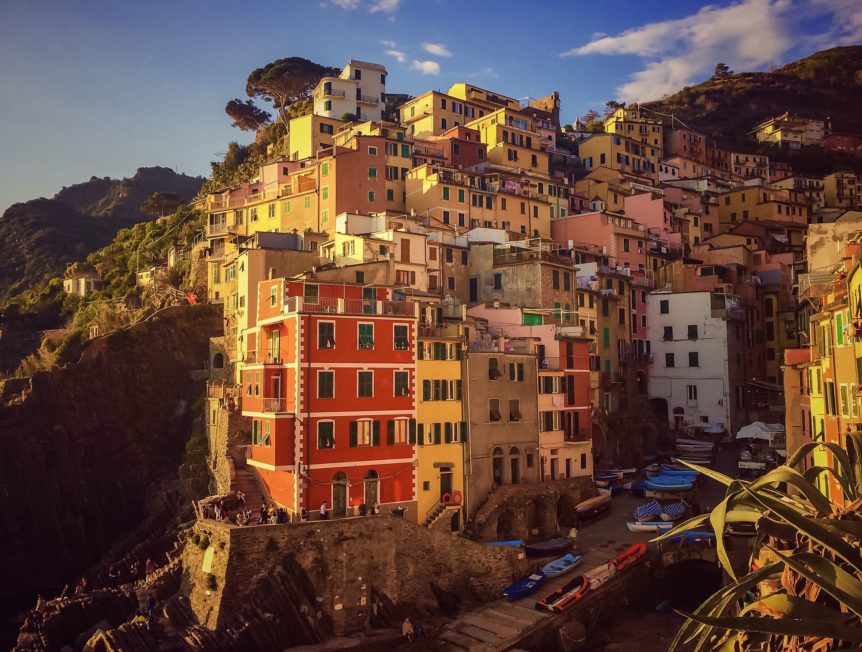 It is the first village of the Cinque Terre coming from La Spezia towards Genoa. With its colorful houses on the cliffs that slope down to the sea, it is one of the most photographed destinations by vacationers and professional photographers. In fact, reaching Riomaggiore by sea is a unique emotion, with a view that embraces the town and the rugged hills that surround it, crossed by terraces that produce some of the most renowned wines for enthusiasts.

Historians trace the first inhabited settlements back to the eighth century, but it is around the year 1200 that the village developed on the sea under the protection of the Republic of Genoa. There are numerous valuable architectural testimonies dating back to the Middle Ages, such as the church of San Giovanni Battista, the oratory of Santi Rocco and Sebastiano and the castle of Riomaggiore. In the main alley is the oratory of Santa Maria Assunta, a 16th-century church of the Compagnia, with the beautiful 15th-century tempera triptych of the Madonna and Child. Another monument to visit in Riomaggiore is the sanctuary of Nostra Signora di Montenero, located on the Telegraph heights overlooking the town, built on the spot where the inhabitants hid an image of the Madonna to steal it from the Lombards. Riomaggiore also has the famous pebble beach, very crowded in summer, which can be reached from the left of the marina and which offers shady rocks or places to spread out the towel in the sun.

The Borgo is also home to the Cinque Terre Park, the institution that deals with the protection of a fragile territory and which in summer sustains a significant tourist impact. There are many paths that unravel from Riomaggiore, at different levels of altitude and that can reach the other villages of the Cinque Terre; but the most famous is certainly the Via dell’Amore, unfortunately still closed for renovation after a landslide. To signal the food and wine that characterizes Riomaggiore: the typical dishes of the village are of peasant roots, such as the savory rice cake, traditionally prepared for the patronal feast of St. John the Baptist on June 24, and the field soup, with wild herbs, potatoes and olive oil. Among the seafood dishes the lion’s share is made up of stockfish, salted anchovies and stuffed muscles. The terraces around the town produce excellent wines, especially whites: IGT Cinque Terre wines and schiacchetrà.