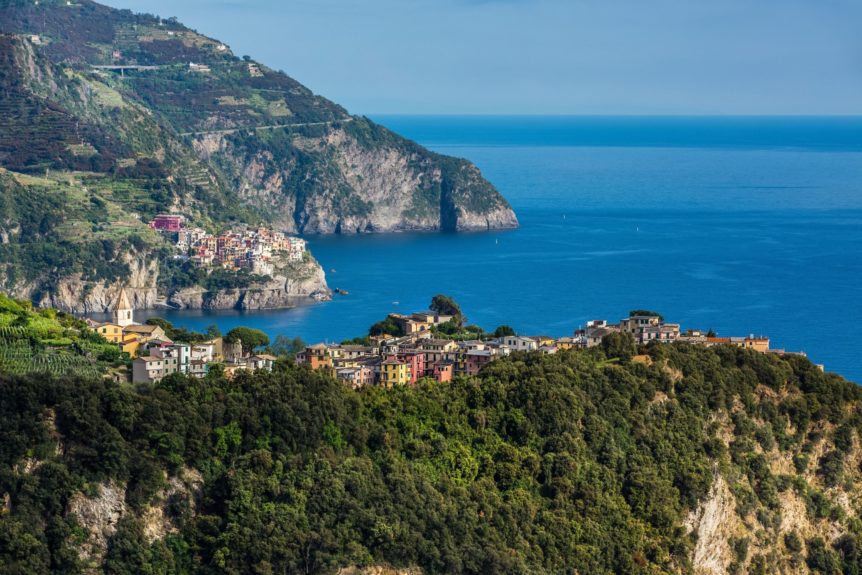 It is the only town in the Cinque Terre that does not have direct access to the sea, but it is the one from which the sea is best seen. Corniglia, located between Manarola and Monterosso, stands on a spur of rock about ninety meters high, a promontory that dominates the entire coast of the Cinque Terre at 180 degrees. It seems difficult, Corniglia, starting from the access stairway that climbs up from the station, steps corroded by salt that seem to never end. But when you reach the top, the spell opens up: alleys and squares, shops and restaurants. The Church of San Pietro, splendor of Ligurian-Gothic art.

Alleyways teeming with beautiful people from all over the world, artists and young people. The sea glistens below, but it is not unreachable. From the town you can reach the marina of Corniglia, used by its inhabitants for the shelter of boats; and the beach of Guvano, which can be conquered by going down and along the sea, famous for its wild beauty and because it is frequented by naturist tourism.

Corniglia stands out for its manifestations: the Church of San Pietro is home to the “5 Terre organ festival” every summer; for the Feast of the Patron Saint, on 29 June, the whole village comes alive with celebration and it is possible to taste the typical specialty of Corniglia, the rice cake. Also in Corniglia the cultivation of vines in the terraces and the production of wine is flourishing, so much so that the good glass of “Vernaccia di Corniglia” is mentioned in a passage from Boccaccio’s Decameron.

Numerous artists have stayed in the village, such as Trento Longaretti and Michele Pistoletto. And for several years, Enrico Rava’s trumpet resounded among the walls of the narrow alleys. The best way to reach Corniglia is by rail, but the town is connected with all the main trails of the Cinque Terre.