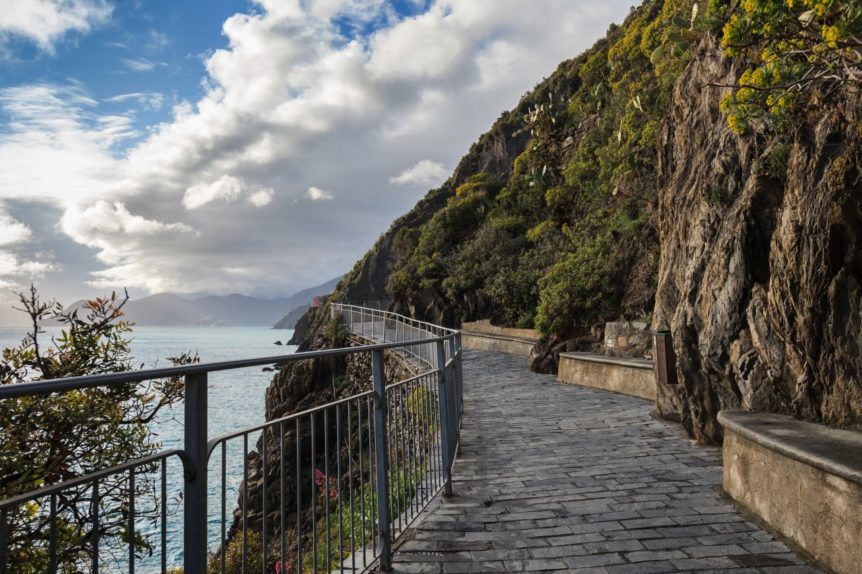 One of the most romantic and iconic destinations in the world, the Via dell’Amore begins near the Riomaggiore train station and ends in Manarola. It is part of a longer route, marked with number 2 by the CAI and known as the “blue path”, which crosses the entire territory of the Cinque Terre from Riomaggiore to Monterosso.

The Via dell’Amore is a journey of heart and mind, overlooking the sea, between the rock and the sky, in the midst of the colors and scents of a lush Mediterranean and exotic scrub: brooms and euphorbia, agaves and pittosporums, figs of luxuriant India. The last stretch passes under the terraced vineyards, famous for the production of the white wines of the Cinque Terre.

The Way of Love was built in the beginning of the twenties of the 900, through excavations in the rock, for the occasion of the extension of the railway line between La Spezia and Genoa that connected the stations of Riomaggiore and Manarola, with the aim of joining the two countries by land. In the thirties, when the works were completed, the path became a meeting place for young lovers, thus taking the name of Via dell’Amore.

In recent years, the Cinque Terre National Park has carried out a series of interventions to improve aesthetics and usability: a railing more integrated into the landscape, a new and more uniform paving, a sustainable lighting system, a rest area equipped, lifts for the disabled at the two ends of the route. The Way of Love is also home for artistic installations created by the students of the Brera Academy in Milan under the guidance of Maestro Lino Marzulli.

The Way of Love is not accessible today, except for a short distance starting from the Manarola station. This is due to a landslide in September 2012. The opening of this first part of the path is a good omen for its complete restoration even if the works, due to the complexity of the intervention and the fragility of the territory, are still in progress.

Cinque Terre Ferries is new shipping company that offers original excursions to reach and get to know the Cinque Terre and Portovenere.